Dry for January? New Bars Cater to the ‘Sober Curious’ 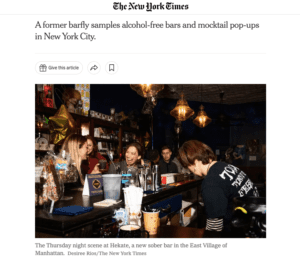 I stopped drinking six years ago. There are many things I don’t miss: hangovers, empty checking accounts, throwing up on the subway.

Then there are things I do miss: the seedy splendor of a dive, the shallow glamour of a cocktail lounge, and the relative ease with which I could meet new people and make new friends. I also miss the serendipity, spontaneity and eccentric characters that a night spent crawling from bar to bar sometimes offered.

Luckily for me, a new crop of alcohol-free bars, dance parties and “sober curious” events have sprung up in recent years. They cater to the millennials and zoomers who are reportedly drinking less, and are seeking an alternative nightlife that is not centered around alcohol. In honor of Dry January, I spent a long weekend this month exploring some of New York City’s new mocktail lounges and liquor-free pop-up parties.

My first stop was Club Curious, a three-room storefront in the Williamsburg section of Brooklyn that serves as a clubhouse for Curious Elixirs, a brand of nonalcoholic bottled cocktails. Club Curious has held private events, but tonight was the first public one. Roughly 40 guests were gathered in the dimly-lit space, nibbling on home-baked focaccia. The bar offered eight mocktails inspired by classic drinks like old-fashioneds, painkillers and French 75s. I ordered a “No. 8,” meant to emulate an Amaro neat, and sat next to a young woman with a two-toned bob who was leafing through a copy of “The Egyptian Book of the Dead.”

A mentalist named Jason Suran performed magic tricks, including one in which he successfully named two audience members’ deceased pets. Afterward, candles were lit and the brand’s owner, JW Wiseman, 42, took to the small stage for an improvised music set alongside his friend Eli Kim, 41. While they jammed, I chatted with Benjamin Ickies, 42, a professional accordionist and mathematician, who regaled me with stories of a friend’s “polyamorous commune of fire dancers” in Austin.

At one point I got up to get a drink, only to find that the bartender had abandoned her post to croon onstage. By 11 p.m., the crowd had dwindled to a handful but before I left, Mr. Wiseman told me about a roving, booze-free party called the Third Place Bar, taking place the next night at the Butler cafe in Williamsburg. I arrived at Third Place at 6:30 p.m. After ordering a Spritz Spritz, a take on an Aperol spritz that tasted like a bitter Shirley Temple, I chatted with Jeanette Hanna, 39, who was meeting other members of the Sober Black Girls Club, a social support group based in New York City.

Turns out Jeanette and I had both lived in Wisconsin, went to college in Minnesota and were familiar with the vagaries of telling your upper Midwest friends that you no longer drink. We exchanged numbers and made loose plans to meet up at another sober bar. As with any bar chatter, I took the plan with a grain of salt. The event’s host, Sam Bail, 37, a data engineer by day, welcomed guests in a leather miniskirt and a metal band T-shirt. As she unwrapped soft pretzels and straightened a table of gift bags, she lamented how bright and cheery the place was.

“It’s too nice, it’s too well-lit,” said Ms. Bail, who called herself “an old punk” and added that she was on the lookout for a more “divey” permanent home. “I kind of want terrible bathrooms.” She would not be a fan of my next stop, Sèchey, an upscale boutique on Hudson Street in the West Village that sells nonalcoholic spirits. In honor of Dry January, an alcohol-free pop-up bar called Absence of Proof is holding parties there this month. The party was founded last year by Elizabeth Gascione, 25, an advertising account executive, “for those taking a night, month, or lifetime off of drinking,” she said.

Her mother handed me a plastic flute of Prima Pavé Rosé Brut before I was ushered into the basement lounge modeled after a 1920s speakeasy, filled with antiques, tassel table lamps and a vintage piano with an ornate glass panel. The well-dressed crowd of young professionals ordered lychee martinis and other bespoke mocktails, posed for photos and occasionally danced to late 2000s hits like Lily Allen’s “Smile” and M.I.A.’s “Paper Planes.”

“I wish I had enough money to throw parties like this in my home,” said Mitchel Raudat, 28, an M.B.A. student who lives in Queens with his girlfriend’s parents. I left Sechèy in time to make last call at Kava Social, an alcohol-free bar that opened in Williamsburg in 2020 and specializes in Kava root tea, made from a South Pacific plant that purportedly has soothing properties.

If this is inspiring you, join our Sober Curious group, launching tonight, Wednesday, January 18, 2023. Missed the start? You can join up to 2 weeks after the start.

Bright, airy and open, with a colorful painted floor and ample seating, it felt more like a co-working space than a cocktail bar. The bartender, Gerry Lange, 35, said I had missed a massive rush an hour earlier, but there were still several dozen people of various ages playing board games, chatting and tapping on laptops around 11 p.m. One regular, Julian Foglietti, a 26-year-old photographer, was hopping from table to table. He moved to New York from Ohio eight months ago and comes to Kava Social several times a week to make friends outside of a traditional bar. “It really became the foundation of my entire social life in the city,” he said.

I asked the bartender for a recommendation and got a Passion Twist, a cocktail made with passion fruit tea and Kratom, an unregulated herbal supplement often used as a mood booster. The drink tasted like cherry cough syrup to me, but I reminded myself that like alcohol, Kratom, too, may be an acquired taste. I chased it with a traditional bowl of hot Kava, which I finished just before closing time.

On Sunday afternoon, I made my way to Hekate, one of the city’s newest sober bars. Located on Avenue B in the East Village, it feels like a witchy tea parlor, with tin ceilings, antique china cabinets and well-worn hardwood floors. To my surprise and delight, Jeanette, the woman I met at Third Place, followed through on our half-baked plan to hang out. When we arrived around 4 p.m., the long and narrow bar was packed with an eclectic crowd. Two gray-haired women sat at a table, chatting over tea. We sat next to a 30-something woman who called herself “sober curious.” I ordered a mock sangria, Jeanette had a purple mocktail called a “healer,” and we both got tarot readings from Matthew Collura, 31, who wore a brown peacock print shawl and mascara.

When Mr. Collura turned over the Divine Light card during my reading, he gasped. “Whenever this card comes up, I have to go have a cigarette,” he said.

Sure enough, he dashed out the front door and took several pulls from a vape before returning to the bar to finish the reading. “I don’t know what you’re doing,” he said, pointing at the cards, “but whatever it is, it’s powerful.”  Read the whole article at the source.

If this sounds like something you’d like, but want some support on, join our virtual Sober Curious group, launching tonight, Wednesday, January 18, 2023. Missed the start? You can join up to 2 weeks after the start.